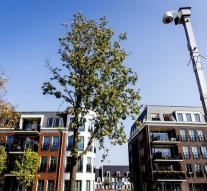 - The emergency regulation Mayor Plantsoen district in Maassluis, which ends Tuesday, will not be extended. Mayor Edo Haan sees there's no reason to do so, because the dust has settled, a spokesman of the municipality Monday.

The emergency decree was announced two weeks ago for the troubled district and some surrounding streets. Youth made it a nuisance. There were church property destroyed, ruptured cars of residents, house windows smashed and there would be talk of intimidation and provocation to quarrel.