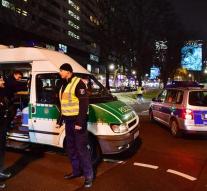 the hague - The Ministry of Foreign Affairs on Monday evening still no evidence that the Dutch are among the victims of the alleged attack in Berlin. A truck drove there on a Christmas market in the Memorial Church near the Kurfürstendamm.

Police reported on Twitter that at least nine people were killed. There are also many wounded. The Dutch embassy in Berlin has contact with local authorities and find out if there are Dutch are among the victims, said a spokesman for the Foreign Ministry.