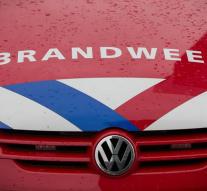 utrecht - The concert in Utrecht on a new collective agreement for the fire Monday night did not go through. Representatives of the FNV walked away after a delegation of employers did not show up, said a spokesman for the union.

The concert was scheduled for 19. 00.,, We waited until 19 to 15 hours. We find this disrespectful. Tomorrow an ultimatum goes out the door, '' said a spokesman for the association. A spokesman for the Association of Dutch Municipalities, which is involved as an employer in the talks, said earlier in the evening that it was precisely the FNV which came too late.

The reading of the VNG was contradicted by a spokesman for the police.,, The VNG was too late. The FNV left. It was also informed outside, '' said the police spokesman.

The FNV was pulled with about four hundred firefighters to Utrecht. Most likely follow quickly actions.