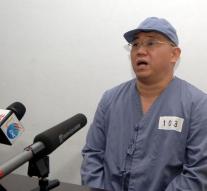 seoul - North Korea will not negotiate with the United States on two US citizens detained there. For as long as the former prisoner Kenneth Bae continues to talk publicly about his time in prison, there is no consultation.

,, As long as Kenneth Bae continued his chatter, we will not proceed to any compromise or negotiations with the US regarding American criminals. And there will certainly be no such thing as a humanitarian action, 'said the North Korean state media KCNA.

North Korea arrested Bae, an American missionary, in November 2012 and sentenced him to fifteen years' hard labor for crimes against the state. He was released two years later and wrote about his detention in an autobiography that came out in May. Since then Bae gave several public appearances and interviews about his experiences to promote the book.