Home / World / No cars in Milan by air pollution 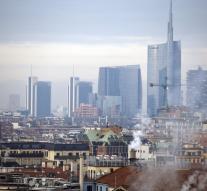 - The Italian city of Milan takes drastic action because of air pollution. From Monday to Wednesday between 10:00 and 16:00 a driving ban for private vehicles. Only public transport is allowed.

The city in northern Italy has suffered from the sunny weather combined with wind. The limit of 50 micrograms of particulate matter per cubic meter of air this year already exceeded more than the permitted 35 days. This also applies to other cities like Naples, Turin and Rome. In the capital, is also working on measures.