Home / World / No agreement at a conference on Cyprus 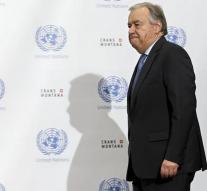 crans montana - Negotiations to end the four-decade conflict in Cyprus have failed. The United Nations Secretary General Antonio Guterres announced on Friday that the talks about reunification in Switzerland had not yielded any results.

'I am very sorry that despite the strong involvement of all delegations, the conference on Cyprus has been concluded without agreement being reached. 'He said afterwards. The UN boss was flown on Thursday to help the Greek and Turkish Cypriots to reach an agreement.

Guterres did not want to go into the reasons why the negotiations failed. According to him, there were big differences in different areas. The island is divided into two parts since the arrival of Turkish soldiers in the northern part of July 1974.