Home / World / 'No agreement about Brexit on Sunday evening' 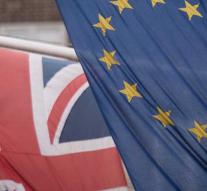 brussels - The ambassadors of 27 EU members minus Great Britain have been told that there will be no Brexit agreement on Sunday. EU officials thus contradict an earlier report that the Brexit negotiators would have reached an agreement on the departure of Great Britain from the EU on Sunday. The Politico website reported that on the basis of information from three EU diplomats.

According to EU negotiator Michel Barnier, there is still no agreement on the Irish border issue. Ireland wants Brexit to remain open to the border with Northern Ireland. 'Despite great efforts, there are still some important issues open, including the Irish issue,' Barnier said.

The EU wants the British to have the assurance that Northern Ireland will stay within the EU economy if no trade agreement is reached during the negotiations. The British Prime Minister Theresa May and her Unionist allies in Belfast want a hard line between EU member Ireland and Northern Ireland.

On Thursday, the heads of government of the EU countries will meet for a summit. Then British Prime Minister May will try to make a deal with Brussels about the conditions of the British departure from the European Union. This agreement must then start in March 2019.