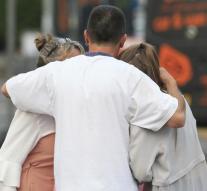 brussels - The attack in Manchester is no reason to tighten security measures for the NATO summit in Brussels on Thursday. The Belgian government's crisis center told it on Tuesday.

'Since the attacks in Brussels, the possibility of an attack is systematically taken into account,' said Mayor Yvan Mayeur. 'Currently we are at the maximum limit for security measures. '

The threat level in Belgium remains at 3, the second highest level.