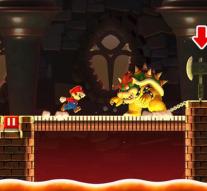 tokio - The game Super Mario Run is from Thursday available for all iOS devices. The game is part free play after level four to be paid once only 9.99 euros.

Super Mario Run brings Nintendo world famous plumber for the first time to the smartphone. Nintendo hesitated a long time before to make it decided games for mobile phones. Despite the competitive disadvantage in this area succeeded manufacturer of games and consoles there last summer with Pokemon Go to unleash a worldwide craze.