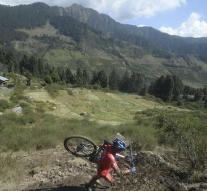 kathmandu - Nine mountaineers died in the Himalayas as a result of a landslide that buried their encampments. The climbers' camp stood south of the almost 7200 meters high mountain Gurja in Nepal.

The organizer of the trip told the newspaper The Himalayan that it concerns five South Koreans and four Nepalese. The mountaineers waited for better weather at about 3500 altitude to pull up further. During a blizzard, the fateful landslide occurred.