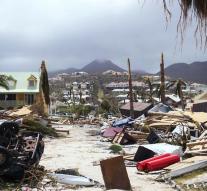 paris - In the French part of the Caribbean island of Saint Maarten and on the island of Saint-Barthélemy, nine deaths were caused by Hurricane Irma. Seven people are still missing. This is what the French Interior Minister Gérard Collomb said on Friday. He said there were 112 injured.

Irma entered the northern part of the Caribbean on Wednesday and made huge ravages on several islands, including St. Maarten. Currently, the death toll in the region is a preliminary estimate. There are a total of 18 deaths counted on (British) Anguilla, Barbuda, the Virgin Islands, Puerto Rico and the French islands.

The French minister in charge of overseas territories, Annick Girardin, was on Saint Maarten on Friday and was shocked by the damage.