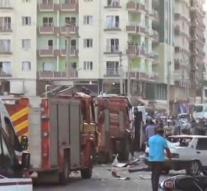 diyarbakir - Bomb attacks on police in two towns in southeast Turkey on Wednesday at least nine civilians killed. Dozens of others were injured, sources left out by the security forces. They keep the Kurdish separatist PKK responsible.

Earlier in the day were Turkish soldiers in an ambush near the Iraqi border. Kurdish rebels from northern Iraq opened fire with rocket launchers and artillery. Four Turkish soldiers were killed. Also, the attack was the work of the PKK, inform the sources. A leader of the Kurdistan Workers' Party, as the movement is officially called, announced last weekend all new attacks on the police.

Four civilians were killed Wednesday by the explosion of a roadside bomb. The explosive distance inflammation was brought to a hospital in Kiziltepe when it passed a police van. Thirty civilians and ten policemen were injured.


In Diyarbakir, which many Kurds see as the capital of Kurdish Turkey, took the explosion of a car bomb five civilian lives. Also, the attack was directed against the police, say the sources. There were twelve wounded, including five officers.

Nobody has claimed responsibility for the attacks.

Since the peace talks between the Kurds and the Turkish government piece ran in 2015, is more than ever shed blood in the southeast. The Turkish army last summer launched a massive campaign against the PKK. Clapping controlled back bloody.