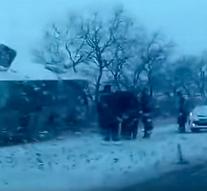 moscow - A traffic accident in Russia on Sunday, nine children and two adults killed. The young victims were, according to Russian media between 12 and 14 years. They belonged to an acrobatics team was headed by bus to go home after a game in another city.

The fatal accident occurred in western Siberia. Between the cities Chanti-Mansiysk and Tyumen bus collided with a truck. The devastation was enormous. According to the English-language Russian channel RT were a total of 29 children and three adult chaperones on the bus. Ten ambulances have injured taken to hospital.

The accident happened in bad weather. The exact cause is still under investigation. Possibly the bus driver can tell you more about the circumstances. He survived the accident and is in hospital.