Home / Tech / Nightpools in Japan are attracted by social media 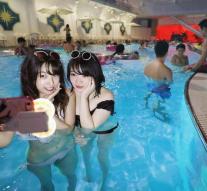 tokio - Young Japanese women spend a lot of time on summer nights at the luxury hotels. Not to swim, but to shine on social media. The goal of the girls is to make themselves in their bikini while having cocktails with friends on hot air beds.

Nightpools in Japan have been there since 2001, but thanks to the social media, they are now mostly attracted to Japanese girls. 'There are times when people have to wait three hours in a row,' said a spokesperson for the Tokyo Chiyoda Ward hotel at The Japan Times. 'We never thought the impact of social media would be so great,' said the spokeswoman. The Prince Hotel in the Japanese capital expects three times as many visitors this year.

An online survey shows that 44 percent of Japanese women surveyed say they go out with the explicit goal of uploading photos to social media. Chief Editor Nao Ohashi of the travel magazine Jalan says: 'Social media is an instrument for recognition for young women. '

A visit to the newly opened swimming pool of the hotel New Otani in Tokyo is not cheap at a price of over 60 euros. 'It feels like something special and extraordinary. I'm glad I can put something on social media to get more followers, 'says a 22-year-old student in The Japan Times. 'I will not swim because my makeup and haircut are confused. '

More companies jump into the Asian trend and pick up a piece of cake. Especially amusement parks and holiday parks, including Huis in Bosch in Nagasaki, have opened their swimming pools in the evenings and offer lower entrance fees than the luxury hotels.