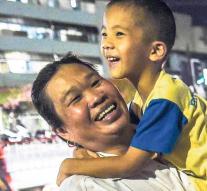 - What could have become a drama ended this afternoon as a fairy tale. The twelve Thai football players of the Wilde Zwijnen team and their coach have all escaped from the Tham Luang cave. Hollywood is warming up for the story that seems written for the white screen.

With a 'Hooyah' on the Twitter account of the Thai Navy seals, it was official just before seven o'clock in the evening. All Wild Boars whose elite unit had already announced on the same social medium that they would be reunited were again above ground. A sigh of relief could pull across the world. Starting in Chiang Rai where the Dutchman Remco Vleesch Dubois felt the euphoria.

'Actually we already knew at the beginning of the afternoon that it would be alright', says the local representative of pump supplier Kirloskar. He acted as adviser to the relief workers and went to see the end of the morning at the entrance of the Tham Luang cave complex. 'At 1 o'clock all boys and their coach were in room three. That is beyond the most dangerous part of the route. You felt the relief. Everyone really thought: We did it. '

The Dutch think that the Thai can be very proud of what they have achieved. From all sides and many embassies including the Dutch, according to Vleesch Dubois offered help, almost forced. Thank you in most cases. Today the American entrepreneurial idol Elon Musk came along with an unmanned rescue submarine.

'The Thai said 'thank you' and let the thing park in the corner as quickly as possible to continue quietly in their own way,' says the expert in the field of water management with a smile. The big man behind Tesla had a hard time not needing it in this case, but reported early on to congratulate the emergency services via Twitter with the successful rescue. He joined in a row of prominent figures such as British Prime Minister Theresa May ('The world watched'), her American colleague Donald Trump ('What a great moment'), the first team of AS Roma ('the best football news of this summer'). ') and the Spanish royal family (' Our admiration and recognition for the Spanish diver Fernando Raigail ').

'The only help they really needed was that of the cave divers', Remko Vleesch Dubois recalls. 'Those men from England, Australia and Belgium have done a great job. The rescue is mainly their performance and that of the Thai Navy Seals. Unfortunately, one of the Seals has to pay for this with his life. When that happened, everyone realized just how difficult and dangerous the rescue action was. It really came in. Until then, the Thai had only been optimistic about the good outcome. '

The footballers have been taken to the hospital in Chiang Rai. They have to remain in quarantine because of possible contamination with the histoplasmosis bacteria. A condition that can cause a lung infection. Certainly four of the football players actually have such complaints according to Thai media. Because the health of the rescued is ahead, they unfortunately can not respond to the invitation from football federation FIFA to attend the World Cup finals next Saturday in Moscow. FIFA boss Gianni Infantino already invited them last Saturday when the rescue had to start.

The director of the school where the boys are sitting, had already announced that the players would love to go. They come from the poor northern part of Thailand, the region that is close to Burma. 'They are happy, but very poor children', Remko Vleesch Dubois colors the background of the Wild Boar. 'It is a pity that they can not go, because it could have made a lot of good at once. '

Even without this sugar-sweet final scene, Hollywood sees a potential blockbuster in the story of the football players. Even before all the Wild Boar were out of the cave, two producers from the American Pure Flix films were walking around the spot of rescue for research. In front of the Australian news agency AAP, producer Michael Scott stated that he sees a large Hollywood production with A-list stars.