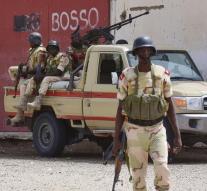 abuja - Nigerian forces have slain during an action in Gangere 42 terrorists of Boko Haram and eighty hostages freed. This was announced by military spokesman Sani Usman Thursday.

An unknown number of militants succeeded, whether or not injured, to escape. The IS related to movement held in the camp in the province of Borno 42 children and 38 women prisoners.

Boko Haram wants in northeastern Nigeria and in neighboring areas establish a religious state based on Sharia, Islamic law. Since 2009, Sunni fundamentalists have definitely 14. 000 people killed. According to the UN, about 2.7 million residents fled the violence.