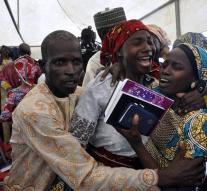 abuja - Nigeria will 'redouble' its efforts to the girls and women who were abducted in 2014 in the village Chibok to retrieve Boko Haram fighters. That said Nigerian President Muhammadu Buhari Wednesday.

Buhari spoke Wednesday with 21 girls who were released by Boko Haram. They were released after talks between the government and the rebels under the mediation of Switzerland and the International Red Cross.

In total, more than two hundred girls were kidnapped.