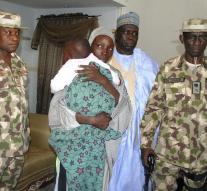 abuja - The Nigerian army claims to have 85 prisoners freed from the hands of terrorist group Boko Haram. An army spokesman said Sunday that it mostly concerns women and children.

The action against Boko Haram took place in northeastern Nigeria. The army would be a few towns on the shores of Lake Chad have been under control. According to the army in confronting five fighters from Boko Haram and a slain soldier.

Boko Haram has its roots in northeastern Nigeria, but the Islamic terror group also commits regular attacks in neighboring Niger, Cameroon and Chad.