Home / World / Nigel, the loneliest bird in the world, died 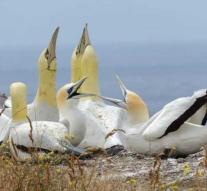 wellington - Keep the handkerchiefs ready, because Nigel the lonelyest bird in the world has died. In addition to the (concrete) love of his life, at the love nest he built for her.

For years, Nigels was the only gannet on Mana Island, just north of the New Zealand capital Wellington. His only company: 80 concrete specimens, placed on the coast in 2012 to lure a new colony of jan-van-gents.

There were even systems set up to imitate the jan-of-ghent call, and volunteers painted Jan-van-Gentenpoep annually on the rocks. Nothing really worked; only Nigel appeared in 2015. Big party, but that's it. Nigel had no heart of stone and fell in love with one of the concrete decoys, so the Daily Mail knows.

He even built a love nest for her / it and at the end of last month Nigel died as he lived: between the concrete fake ones.