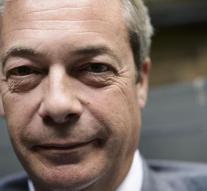 london - Nigel Farage is back as leader of the British eurosceptic UKIP party. He goes as interim temporary now lead the party his successor Diane James unexpectedly stepped down after only eighteen days in office.

'I keep trying to escape' Farage told the BBC. 'But before I'm really free, they drag me back. 'The populist resigned in July as leader of UKIP after the British people had voted by a small majority for a departure from the EU. That was his main goal.

James came on September 16 as his successor, but put it down leadership Tuesday at professional and personal reasons.