Home / World / Nieto at Trump: we do not pay for wall 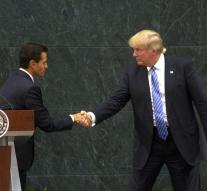 - President Enrique Peña Nieto of Mexico against the US presidential candidate Donald Trump said that his country is not going to pay for a wall at the border with the United States. That says a spokesman Nieto.

Trump wants to see is a wall between the two countries to put an end to illegal immigration. Republican wants the Mexicans themselves pay for the construction costs.

After talking with Nieto Trump, however, told US media that the two it had over the wall, but he has not Nieto discussed at the meeting who will pay the cost for the wall.