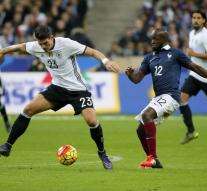 - Among the many deaths in the horrific attacks in Paris is also a member of the French football player Lass Diarra. While the 30- year-old midfielder from Olympique Marseille stood on the field in France- Germany at the Stade de France was his niece killed in one of the attacks.

Diarra has the terrible news made ​​public via Twitter. " I am personally affected by the attacks. My niece, Asta Diakite, is one of the innocent victims of the shootings. She was like a big sister to me ", the emotional Diarra told.

Also at the entrance to the Stade de France, an assault was committed. The explosion was clearly audible in the clash.

Antoine Griezmann, another international of France, got to hear better news. His sister was sitting in the theater Bataclan. There was a dramatic attack place. She survived the massacre.

Follow here all the news about the terrorist attacks in Paris.