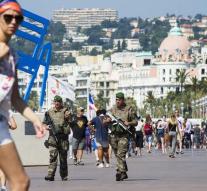 - Among the 84 victims of the attack on the Promenade des Anglais in Nice, France, 38 foreigners, the majority of tourists. The victims come from nineteen different countries. This was announced by the French Ministry of Foreign Affairs.

There are people from Algeria, Germany, Armenia, Belgium, Brazil, Estonia, USA, Georgia, Italy, Kazakhstan, Madagascar, Morocco, Poland, Russia, Romania, Switzerland, Tunisia, Turkey and Ukraine have been killed when the Tunisian Mohamed Bouhlel with a truck crashed into the crowd. The bombing Dutch were no deaths, but got a wife and two children wounded from the Netherlands.

If the wounded are included, 29 countries have been affected by the attack. Nineteen people are still in critical condition in hospital.