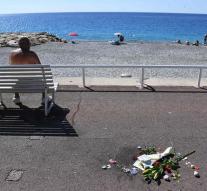 - Why Mohamed Lahouaiej Bouhlel last week on the seafront in the southern French city of Nice 84 people dead driving a truck, is still shrouded in mystery. It is clear that the 31-year-old Tunisian his act thoroughly prepared. He had the pedestrian zone on the previous two days explored several times, French media reported citing sources in the investigation.

According to the television channel BFM Bouhlel sent shortly before the attack a text message in which he more weapons to,, '' asked. He sent the request to one of the men who were later arrested by the police.

Jabeur Lahouaiej Bouhlel said his brother on the afternoon before the attack last had telephoned him. He sent a photo of himself surrounded by people partying in the French city. '' According Jabeur was his brother smiling in the pictures, but he did not see the picture.