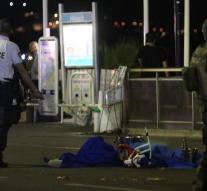 - The death toll after the attack in Nice has risen to 77. Region President Christian Estrosi called this number Friday morning on Twitter.

On the Promenade des Anglais drove a truck driver with his truck into a crowd. According to French media are at least forty people in critical condition in hospital. Police have slain the assassin.