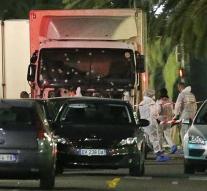 - The death toll from the attack in Nice has risen to eighty. The French Interior Minister, Bernard Cazeneuve, reported further Eighteen people in critical condition in the hospital and many others injured.

,, Our thoughts go out to their families and to the traumatized residents of Nice, '' said Cazeneuve. The minister said that there is a psychological team is present in Nice to catch victims.