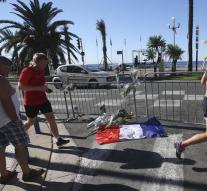 - Islamic State has claimed responsibility for the bloody attack on July 14 in Nice, through its press office Amaq. 'The perpetrator of the attack in Nice in France, a soldier of IS. He has performed this action in response to our call for residents of the countries fighting IS attack. '

The police are still investigating whether the perpetrator, Mohamed Lahouaiej Bouhlel, had links with the terrorist group. There is none are known at this time. Bouhlel was not known as radicalized by the intelligence services. From stories of neighbors and acquaintances who came out yesterday, the culprit seemed to be no strict Muslim he never prayed and gave Ramadan halfway. As may have been a cover-up.

That IS claiming the attack, does not mean it has given the organization Bouhlel command. The caliphate, which was on the losing side in Syria and Iraq, has to spread interest in utmost fear in the West. They do this, among other things by demanding action from them unknown loners or terror groups, who respond to the call to commit their own resources attacks.


In mid-June IS also claimed the attack on two policemen in Magnanville on. Offender Larossi Abballa stuck a couple in their own home dead. He said negotiations with the police that he had contacted himself with the caliphate.

The death toll from the attack in Nice state since yesterday afternoon on 84. There are 202 wounded, fifty in critical condition.