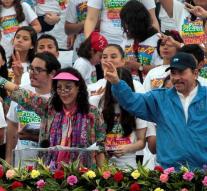 managua - Nicaraguan President Daniel Ortega said Tuesday his wife chose as his running mate who is the vice president if Ortega is elected again. Ortega made his remarkable choice known to the announcement of his candidacy for the upcoming elections.

The 70-year-old left-winger is by far the favorite to win the election in November. It will be the third consecutive term as president to the former rebel leader, who performs that function since 2007. He held the office even though between 1985 and 1990.

Ortega's wife Rosario Murillo is currently government spokesman. Where her husband hardly appears in the media, Murillo is almost seen daily on television.