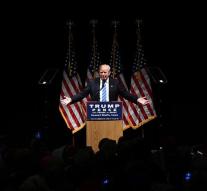 - Donald Trump has violated the nineties the then trade embargo against Cuba. Reported weekly magazine Newsweek Thursday. The revelation is explosive, because older Cubans in the United States who fiercely anti-Castro are often Repubikeins votes.

Trump sent a delegation to Cuba in 1998 to explore whether there were opportunities to do business on the communist island, the embargo should be eased or lifted, said a source who worked for one of Trump's companies in the past. The money for the trip- at least 68 000 dollars- went through a consultancy company and was after the trip with a specified structure via a foreign charity. Humanitarian missions were among the few accepted exceptions to be allowed to spend money in Cuba.

Not long after the trip Trump tried to be first president from standing for election to propose the candidacy of the Reform Party. Which was founded by billionaire Ross Perot after it had made a bid for the White House in vain in 1992. In his first speech, in November 1999 in Miami, Trump promised a group of Cuban exiles that he was before the embargo and would never spend money in Cuba as long as Fidel Castro was in power.