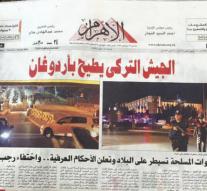 - Several Egyptian newspapers have misjudged the outcome of the military coup attempt in Turkey.,, Turkish army will overthrow Erdogan, '' the state newspaper Al-Ahram headlined Saturday. Youm 7 newspaper summed up his website,, the reasons for the fall of Erdogan '' on; Turkish President was, according to the magazine include one of the largest supporters of terrorist organizations such as Islamic State.

Newspapers were dropped before it became clear how the coup attempt in Turkey developed. Behind the news can sit political motives. In the summer of 2013, the Egyptian army put the elected Islamist President Mohammed Mursi after mass protests against him. Critics of the army spoke of a putsch. Mursi and his Muslim Brotherhood maintained good relations with Erdogan, who was then prime minister in Turkey.