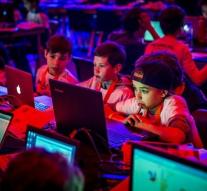 amsterdam - Kids Week shows this week in collaboration with the newspaper CodeUur Foundation Code Kidsweek out about programming for children.

\'Programming is an important topic that will form an increasingly large part in the future of our society,\' said Maartje Dammers, temporary chief of Kids Week. \'In education, however, is programmed to only sparsely addressed. Understandable, because where to start? This paper helps schools and children on their way.\'

In the paper a variety of technical words are explained in detail. Children tell how they learn programming and how they again pass on to other children. Children can get to work. For example, they can create a game using a roadmap. Further hints are given free to start learning programming.

Kidsweek spreads the special edition has a circulation 145. 000 to schools in the Netherlands and to all Kidsweek subscribers.