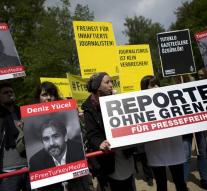 berlin - The publisher of the German newspaper Die Welt has filed a complaint with the European Court of Human Rights (EHRM) on the detention of correspondent Deniz Yücel.

That was reported by Die Welt on Saturday. The German journalist has been in a Turkish prison since February

The Turkish authorities accuse Yücel of 'propaganda for a terrorist organization' and 'encourage violence'. The arrest of Yücel was part of the major arrest wave following the failed coup in Turkey last year. According to journalist platform P24, 166 journalists are in Turkey. In total, more than 50,000 people are waiting for their trial following the coup attempt.

The journalist himself filed a complaint in April at the same European Court, with the support of the German government.