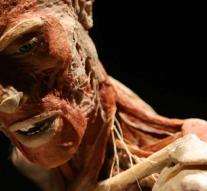 auckland - A 28-year-old man from Auckland, New Zealand, had to appear on Monday because he was accused of having stolen two human toes from an exhibition of Body Worlds Vital.

During his visit to the exhibition, where the human body and organs are central, the man would have taken the toes. That happened on 4 May.

The suspect was accused of 'interfering with the body of an unknown person'. According to official documents, the toes are worth $ 5,500, about $ 3,500 per piece.

The man, who has now expressed his regret, was released today while waiting for the case. Later this year, he has to report to the court in Wellington, writes NZ Herald.