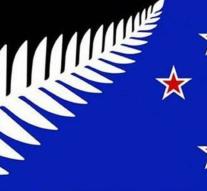 - New Zealand has chosen a new flag in a referendum, but it is far from certain that this will also actually flutter above government buildings.

The New Zealanders were able to choose in several rounds of four designs for the flag. A slim majority (50.6 percent) eventually won a design in which a white sail is shown against a black and blue background, with in addition the four stars of the Southern Cross. That reports The New Zealand Herald Friday.

That they have not made a final choice. In March, followed by a second public consultation, in which the choice is between this design and the current flag. It consists of a dark blue cloth in the left corner of the British Union Jack and the Southern Cross right.

The four designs for the new flag were received in September with derision. The New Zealanders found that there was enough variety to choose from.