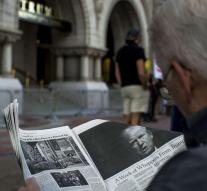 - The New York Times has sent subscribers a remarkable e-mail about the news about Donald Trump. In a letter to his readers the newspaper assured henceforth impartial and fair about the upcoming presidential messages will be.

The largest newspaper in the United States showed in the run-up to the presidential elections, a clear fan of the Democratic candidate, Hillary Clinton. The New York Times named Clinton quickly became a favorite for victory. The antipathy toward the Republican Trump was not determined stabbed to hide in the columns. Email to readers was signed by Arthur O. Sulzberger Jr., The publisher of the newspaper.

The conservative rival New York Post did the Times mail immediately as an admission of guilt on one-sided and biased reporting.