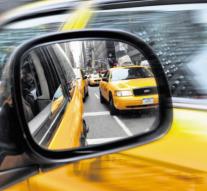 - Taxi drivers in New York are no longer required to speak English. That is the result of a new law that took effect Friday.

The law is part of a broader package to regulate the taxi industry in New York. Besides the deletion of the English language as a compulsory language comes with the new law also one license for all taxi drivers. The New York City Council describes the changes as necessary and suggested that the language requirement was,, a major barrier for new taxi drivers. '

New York has nearly 144 000 active drivers. More than ninety percent of those drivers was born outside the United States.