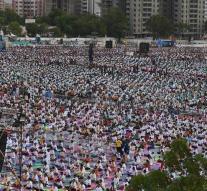 ahmedabad - Almost 300,000 Indians literally wrecked in Ahmedabad on Wednesday in honor of the World Yoga Day. The session has been proposed to be included in the book Guinness World Records as the yoga exercise with most participants ever.

Under the guidance of yoga guru Baba Ramdevj, the Indians often borrowed their exercises. Some well-known politicians from the country also participated. 'Yoga has connected the world with India,' said Indian Prime Minister Narenda Modi as he rolled out his mat.

Modi made it possible for 2014 to unite the United Nations on June 21 for international day of yoga. The government leader is a great advocate of Hinduism. He appointed a minister for Yoga and Traditional Medicine.

The purpose of the World Yoga Day is to support the global spread of yoga, because of the benefits of yoga on body and mind. Today, free yoga meetings are taking place around the world.