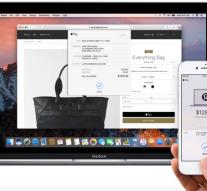 - MacOS Sierra Tuesday released by Apple. The operating system for Apple's desktops and laptops brings Siri to the Mac and can be downloaded free by owners of the update appropriate computers.

Siri is five years available on iOS devices. On the Mac, the virtual assistant slightly less capable. Integration of apps from outside, such as Uber, does not work. IOS has that feature in iOS 10 added just last week.

Besides virtual assistant Siri, there is yet another collaboration with iOS devices via the universal clipboard allows for example, text or a picture can be clipped on the Mac and pasted on an iPad or iPhone. Or vice versa, of course. iCloud also synchronizes better between different devices. Users of Apple Watch can unlock their Mac using the smartwatch which no passwords are required.

Just like on iOS also on the Mac to the Photo app received a major update.