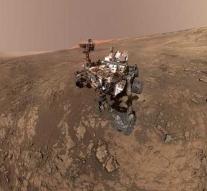 houston - On Mars, new indications have been found that life might have been possible very sooner. Moreover, it has been discovered that the amount of methane in the atmosphere of the planet rises and falls, which could mean that there is still life on Mars.

It is not indisputable evidence, the American space agency NASA emphasizes, but 'Mars tells us that we must continue to look for evidence for life. '

The explorer Curiosity, a driving laboratory that has been touring on Mars since 2012, has studied rocks that are 3 billion years old and just below the surface. Organic molecules turned out to be in those rocks. These are compounds of carbon and hydrogen, and sometimes also, for example, oxygen and nitrogen.

These elements count as building blocks of life. But because the Curiosity has not determined how the molecules originated, it is not proof of life on Mars.