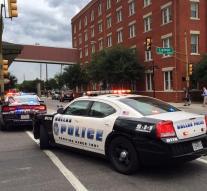 dallas - The headquarters of the Dallas police Saturday extra security because of a 'serious threat.' was searching for a suspect in a parking garage in the building, but was not found.

The building was surrounded by SWAT teams with guns drawn, snipers were positioned on the roofs. A spokesman tells Fox News that police received an anonymous threatening message to be taken seriously.

Many people were at the headquarters attended a memorial place for the killed policemen.


The Dallas police is on high alert after week twelve officers were shot. That happened during a demonstration against police brutality towards black Americans. Five of the agents are deceased.