Home / World / New Spanish party does not want to govern 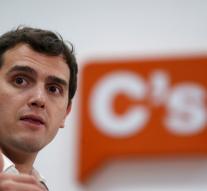 - The new Spanish liberal party Ciudadanos (Citizens) will not be part of a new government. As a party leader Albert Rivera Monday, a day after the parliamentary elections, said.

Rivera's party focuses on the fight against corruption and liberalization of the economy. Ciudadanos won 40 of the 350 seats in the Spanish parliament. In seat number Ciudadanos thus become the fourth party of Spain. In number of votes (3.5 million or 14 percent) is the third.