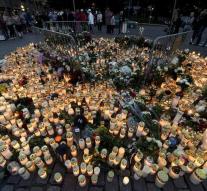 turku - The Finnish police have made new searches in the city of Turku, in the southwest of the country, following the terrorist attack there on Friday.

New arrests have not been made.

The eighteen-year-old Moroccan who injured two passers-bys and eight people on Friday in Turku has not yet heard. He does not want to talk. The police said earlier that he had specifically targeted women on his violence.

The police had arrested four other Moroccan men for their possible involvement in the attack. But it's still unclear what exactly their role was, the police said in a statement on Sunday.

The eighteen year old arrived in Finland last year. He claimed asylum, according to Finnish media, but he was refused. According to the police, he was 'part of the asylum process'.