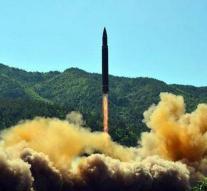 new york - The United Nations Security Council has decided on new sanctions against North Korea on Saturday. The Security Council unanimously voted for a resolution on restricting exports from North Korea. The measure is a punishment for the two missile tests carried out by Pyongyang in July.

The draft resolution prohibits North Korea from exporting iron, coal and lead. North Korean exports are expected to decrease by about one third. North Korea exports annually for over 2.5 billion euros.