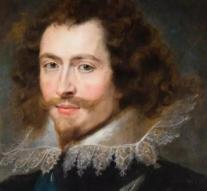 glasgow - In Scotland a nearly 400 year old painting was discovered attributed to the Flemish painter Peter Paul Rubens. According to the BBC, it is a head study from about 1625 by George Villiers, Buckingham's Buck.

The painting is in the Pollok House museum in Glasgow. The painting was always thought it was made by a later painter based on Rubens's work.

When the painting was restored and the dirt was removed, one began to believe that a great discovery had been made. Ben van Beneden, the director of the Rubenshuis in Antwerp, has confirmed that it is an authentic painting of Rubens (1577-1640). He called it a 'rare extension of Rubens portraits supreme'.