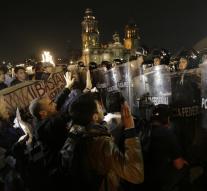 - The Mexican authorities are again investigating the disappearance of 43 students in the state of Guerrero last year. According to the BBC , the Mexican government agreed to reopen the case after an international commission completed an investigation had called flawed.

Mexico concluded that the students by local authorities, were transferred to a drug gang. Who would have slain them and then burned. Remains of the students were found in a garbage dump. The remains would not be indentified because of the burning, but the Inter-American Commission on Human Rights calls it impossible.

According to the committee, the authorities have underestimated the proportion of the local security forces in the disappearance. Also denounced the experts that they were not allowed to interrogate soldiers. The search for the students is resumed by the authorities and there is better cooperation with families of the victims.