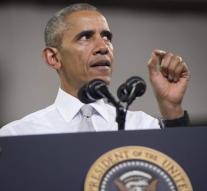 Other Twitter accounts as @WhiteHouse, @FLOTUS (First Lady of the United States), and @PressSec @VP be transferred to the new president and his staff.

The same steps are put on other social media, including Facebook, Instagram, Medium, Tumblr, Flickr, Vimeo and YouTube. The accounts are emptied there, but the new president does retain the followers who collected Obama. The postings are transferred to new names with the number 44 added.

The content of the website White House. gov is transferred to Obama White House on January 20. gov. The new president can then web address Whitehouse. gov start with a clean slate.