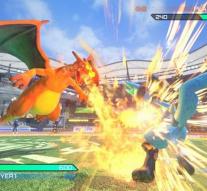 london - Pokkén Tournament DX is the first Pokémon title for the new Nintendo Switch game console. Pox Tournament DX will be on September 22th. This was announced by CEO Tsunekazu Ishihara of The Pokémon Company on Tuesday at the Pokémon Direct presentation.

Pokkén Tournament has already appeared on Wii U. The version for Nintendo Switch introduces a new character called Deidueye. Litten and Popplio make their debut as a help-Pokémon. Users can watch other players' reps and share their best fights with the new replay feature.

During the presentation, tasting of the latest Pokémon titles: Pokémon Ultra Sun and Pokémon Ultra Moon for the Nintendo 3DS were also featured on Tuesday. The worldwide introduction of these games is on November 17th.

The Nintendo Switch came on the market on March 3. The game console is a combination of a console and a handheld. Pokkén Tournament DX lets you play on the television, but also on the handheld to continue on the move.