Home / World / New Orleans is getting rid of it 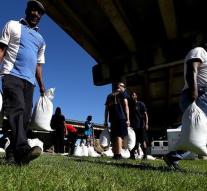 - After hurricanes Harvey and Irma, the United States is having a hurricane again. Tropical storm Nate has become a hurricane on the way to New Orleans. Nate is currently in the Gulf of Mexico and is now officially in power.

The Mayor of New Orleans, Mitch Landrieu, commissioned Friday for evacuation of people in some parts of the city and also set an evening bell. The evening bell is in effect on Saturday night. New Orleans was hit by Hurricane Katrina in 2005. The states of Alabama, Florida, Louisiana and Mississippi have declared the state of emergency.