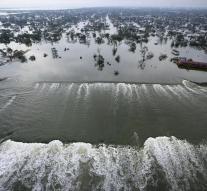 new orleans - The city of New Orleans apologize and money for the conduct of police officers during the chaotic aftermath of Hurricane Katrina in 2005. US policemen then fired at people. A 40-year-old mentally disabled man and a boy of 17 were shot on the Danziger Bridge and four other people were injured. New Orleans has signed an agreement with 17 plaintiffs and pay them a total of $ 13.3 million (nearly 12.8 million).

In April, five policemen were found guilty of the killing and wounding of the victims, who were otherwise all black and unarmed. Even a few days after Katrina was still killed a man, Henry Glover. The officer who shot him was eventually acquitted. Another agent was however found guilty of stabbing burning of body Glover.

The murder of 48-year-old Raymons Robair was part of the agreement. He was already before the Hurricane beaten to death by a policeman.