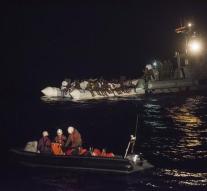 rome - With new dramas over fifty migrants missing in the Mediterranean. According to survivors, they fell into the water because of bad weather and the instability of the vessel where they were sitting on.

A Danish ship, according to the Italian police, 339 people rescued at sea and brought ashore in the Sicilian port city of Augusta. They were three rickety boats heading for Europe. Also dead was recovered.

The Italian police arrested three people suspected of smuggling assistance. was converted by migrants between 523 and 980 euros paid for the crossing.

According to the UN refugee agency, UNHCR, was 2016 the deadliest year for migrants in the Mediterranean, with 3740 people died.